Marital Status: Not married but been with Carol for 42 years

Occupation: Have done lots of things. Currently I work in a

How I started playing Backgammon: Learned in Brazil, in

1977, a former winner of the Miss Universe Contest taught me. She is Swedish.

Current Skill level: I will play with anyone if I have the

Champion” back in the early 80’s

Other important finishes: Who knows, there has been

a lot of backgammon water under the bridge in all that time.

Favorite Backgammon book(s): Backgammon by Paul Magriel. The best title is “Backgammon for Blood” although the author did not have a clue.

Favorite Music: I am all over the place. Love Blues, Rock,

Favorite Food: I like spicy food. Mexican,whatever. I put

cayenne pepper on everything.

Backgammon, Politics (I am a proud liberal and a embarrassed

and disgusted by the present status quo), Soccer (Go USA),

Celtics to rise up out of their ashes)

Person I’d like most to meet: There is any number of people that I would like to shake hands with, but if the meeting were one where we could spend some time and actually talk, person to person, then: Bob Dylan, Bill Clinton, Barak Obama (I would love to see Hilary & Barak run as a team for president), Steve Jobs…

If I could change anything in the world, I would… Global

Warming is probably our most dire threat, so fix that would have to be top priority, but a decent universal health care system would be nice and how about a simpler and more just taxation system.

If I could change anything in the Backgammon world, I

would… love to see more venues where you could just find a game whenever you had the urge.

Additional comments: I have to admit that Backgammon was my game of choice for about 25 years, but Poker has come on strong and I now play more poker than backgammon. I would like to organize / participate in a Poker Backgammon tournament. You play Backgammon the better you do in the backgammon side, the more chips you get to play poker with.

I would like to mention the Stalwarts of Rochester Backgammon: Renee Rosenbloom, Gary Jay and Russ Prizzi.. I miss the good old days, playing in Ottawa, Toronto, New Hampshire and our regular twice-a-week tournaments here in Rochester.

Some great players that were here in this area that have moved away, include: Don Faix, Don Sloan, Marty Storer. I have fond memories of Jerry Nathan from Buffalo and Rich Reasin, here in Rochester. Jerry died quite a while back, but he was the spirit of Upstate NY backgammon for many years and Rich was a strong player, who suffered from bad health for too long before he passed away 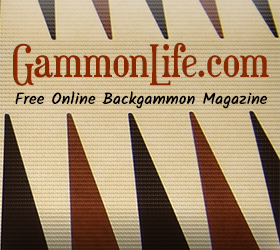